This Cream Cheese Cinnamon Rolls Recipe is going to be a huge hit with kids and adults alike! The cream cheese is added to the dough as a filling before baking and the buns become light and fluffy with a gooey filling. Satisfaction in every bite.

These homemade cinnamon rolls are perfect and truly the best buns recipe! The rolls are so light, soft, and fluffy. The cinnamon cream cheese filling makes the buns so gooey and sticky, the perfect cinnamon rolls! Since the cream cheese is added as a filling, it’s so much quicker to make these buns when compared to traditional cinnamon buns and lighter in calories.

This is a recipe my sister, Olga, shared with me! Thanks so much, sis!

How to Make Cinnamon roll Dough from Scratch-

I hope you loved this homemade cinnamon rolls recipe! Don’t forget to comment below if you give these a try.

Try these other great DESSERT recipes: 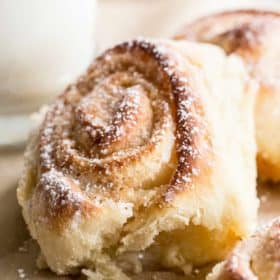