This Bologna Salad Recipe with cauliflower and veggies is so easy to make and loaded with so many flavors. The crunchy bologna meat paired with cauliflower florets, red peppers, and cucumber come together so well.

There is nothing better to bring to a potluck or party than a salad and we have so many to choose from in our Salads that are just as delicious as this bologna salad.

This bologna salad is such a unique salad recipe. It is loaded with veggies and tossed in simple mayonnaise as the dressing. The bologna chunks combined with cauliflower florets, peppers, and cucumbers bring such a crispy and crunchy salad. I love how the cucumbers and red peppers compliment the cauliflower florets and bologna.

Though the salad is so unique, the taste is phenomenal. You can serve the salad in lettuce as lettuce wraps.

HOW TO MAKE BOLOGNA SALAD-

For this recipe, all you need to do is just throw all the ingredients together in a mixing bowl and toss with the dressing and enjoy!

WHAT KIND OF BOLOGNA DO I USE?

You can use your favorite bologna meat from the deli department at your local grocery store.

When ordering the meat, ask them to slice the pieces into thick chunks (about a size 8) so the pieces are too small in the salad.

If you have a European store near you, doktorska kielbasa works great.

Many like ring bologna in this recipe but we most definitely prefer bologna from the local deli. If you do use ring bologna, be sure to peel the skin.

We love this version of the salad but here are some ingredients that would be great in the salad:

Is this salad keto diet approved?

Can I prepare this salad in advance?

This salad is great to prepare ahead of time! Just make everything per instruction and keep it in the fridge in an air-tight container. Then, mix right before serving.

Can I substitute the bologna?

Yes, if you don’t want to use bologna you can use ham and make it a ham salad. 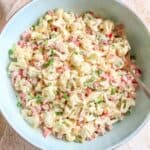