Traditional Pierogi Recipe with a bacon and onion cheesy potato filling. The pierogis are boiled and served with bacon and sour cream.

Just like Red Borscht and Stuffed Cabbage rolls, pierogis are a classic Russian dish served in most homes and restaurants.

Pierogis are a classic European dish (originating from Poland and Ukraine). The dough is rolled out and filled with either a savory or sweet filling, the dumplings are shaped and can either be boiled or pan-fried. Today we are sharing the traditional potato filling but ours adds loaded cheese, dill, bacon, and onion to the filling. This Pierogi Recipe is SO GOOD!

NOTE: This recipe will make about 40-45 pierogis, depending on how thin you roll out the dough and what size molds you use.

how to make pierogi dough for Pierogi Recipe?

prepare the filling for Pierogi Recipe-

TIP: You can use whatever cheese you have on hand. We like four-cheese or Mexican. A combination of mozzarella and mild cheddar will also be great.

Use remaining dough and just cut into small pieces and shape into round shapes and continue with the recipe.

what can you serve pierogis with?

how to reheat pierogies?

The best way to reheat any leftover pierogies is in a greased skillet. Don’t reboil.

how to freeze pierogi?

To freeze the pierogi, once they are shaped place onto a generously floured platter or baking sheet and dust tops of pierogis with flour. Once completely frozen, transfer pierogi to freezer bags.

NOTE: To cook frozen pierogi, you don’t need to thaw them. Just add them frozen to the boiling water frozen and add an additional minute of cook time.

try our other classic Russian recipes- 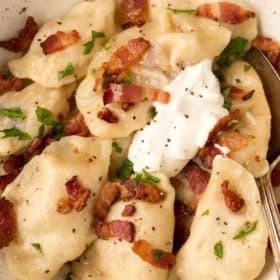