An EASY recipe for Homemade Cinnamon Rolls! The rolls are melt-in-your-mouth soft with a buttery cinnamon filling and topped with the best homemade frosting.

You cannot beat the aroma of freshly baked cinnamon rolls in the home, especially for breakfast.

Enjoy the detailed video tutorial on How to Make the ULTIMATE homemade cinnamon rolls. Don’t forget to SUBSCRIBE to our YouTube Channel!

How to make Cinnamon Rolls?

This is such a simple recipe for classic cinnamon rolls with ingredients you most likely already have on hand.

The cinnamon filling is what adds so much flavor to the cinnamon buns! You want to make sure the butter is softened and at room temperature or else it will not spread.

This cinnamon roll frosting is not like your ordinary frosting. With the added heavy whipping cream, the frosting is so light and airy and not overly sweet. It is hands down the BEST frosting recipe.

Once the filling and frosting is prepared and dough has risen, it’s now time to roll up the cinnamon rolls

TIPS for the BEST Cinnamon rolls-

We answer some frequently asked questions for cinnamon rolls and troubleshooting tips for success for your homemade cinnamon rolls!

SECRET to the BEST ROLLS-

The “secret” to the most delicious cinnamon rolls is adding some of the frosting to the rolls while the rolls are still warm. The frosting penetrates into the buns giving them its gooeyness.

How to serve the Rolls-

Cinnamon rolls taste best if served warm. You’ll want to warm the rolls for 5-8 seconds if they are at room temperature, and 10-15 seconds if refrigerated rolls.

Enjoy the sweet rolls with a cold cup of milk or a hot cup of tea or coffee! So good for breakfast.

Prepare the rolls ahead of time (even overnight). Once the roll is cut into piece, cover and refrigerat until ready to bake.

This easy recipe for homemade cinnamon rolls will become a new family favorite.

OTHER SWEETS TO TRY: 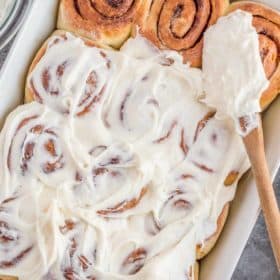