Learn how to make the BEST crostini bread recipe. Crispy thinly sliced bread brushed with oil and seasonings then baked until crunch.

This crostini is perfect to use with so many different toppings, making it a great appetizer.

Appetizers are always a hit for parties or when together for game day! Serve the crostini alongside air fryer wings, the popular buffalo chicken dip, or even our creamy hot crab dip.

This crostini recipe is such a simple and delicious recipe that is great to go along with appetizers or the popular charcuterie boards, or just as toast for dinner. The brushed seasoned oil brings the baguette crunch, SO GOOD!

HOW TO MAKE CROSTINI-

This crostini bread recipe is so easy and you are going to LOVE how fast everything comes together!

Though the time and temperature may easily be adjusted when baking crostini, we highly recommend you keep the sliced the same thickness for even cooking.

We love crostini when they are fresh and crispy. You can however store cooled crostini for up to 4 days tightly covered in the pantry.

These crostini are so versatile and may be served in so many different ways, especially popular to add to your charcuterie board.

What bread should I use?

You want to use white baguette bread or good quality crusty bread.

Can I use stale bread?

Fresh or stale bread will both work the same as the bread slices are toasted.

Do I need to flip my toast when baking?

You don’t need to flip the bread when baking. 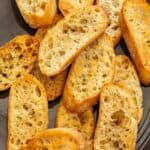