The ultimate copycat recipe for Honey Baked Ham with the best homemade glaze. Learn how to cook ham at home for the holidays or for dinner.

There are just some holidays that are not complete without ham for dinner. Instead of purchasing honey-baked ham, make your own ham at home for a fraction of the price with the same results!

Complete your dinner with a green bean casserole and our creamy mashed potatoes.

This recipe is so easy to make and is so good! With just 10-minutes of prep time, you can have the ham baking in the oven!

The homemade honey glaze is what completes this ham recipe adding so much flavor to it.

There are so many different types of ham that you can get and use for this recipe. We used an 8 pound bone-in ham that was already precooked.

Here are some tips when purchasing ham:

HOW MUCH HAM DO I NEED FOR MY FAMILY?

When deciding how much ham you need, you need to go off the general serving size which is about 2-3 servings per 1 pound of ham.

This honey baked ham glaze is what brings ham to a whole new level. With simple and basic ingredients you can have this glaze ready in under 10 minutes. All you need is:

How to make the Glaze: This glaze is SO easy to make! In a small saucepan, melt together all the ingredients. Bring the glaze to a soft boil and turn off the heat, stirring as needed.

HOW TO COOK A HAM-

How long will my cooked ham last?

You can keep leftover ham in the refrigerator for 4-5 days, we then recommend freezing the meat.

When do I know that my ham is cooked?

You want the internal temperature of the ham to reach 135-140°F. We use THIS thermometer to check the temp.

Can I prepare my ham in advance?

There is not much prep work you need for this recipe, so we recommend making this recipe when ready to cook the ham.

How long in advance can I purchase the ham?

The ham may be purchased a few weeks in advance, be sure to check the date on the package. Keep the ham sealed until it’s ready to bake.

Ways to Use Leftover Ham: 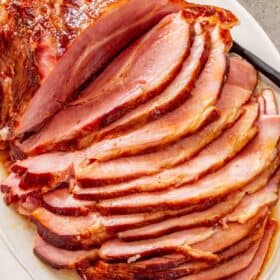